Oliver signs one year contract with the Los Angeles Chargers

A potentially career-ending Achilles tendon injury for NFL running back Branden Oliver has captured the attention of the Los Angeles Chargers. No one in the NFL was aware that Oliver was incorporating a corrective electrical current device that would cut his healing time in half.  Known as the Electro-Equiscope® by Intelligent Bioenergetics, Inc., , it scans and seeks electrical impedance in the body and removes it.  This corrective current normalizes damaged tissue and shortens recovery time.  The therapy has up to a 90% success rate in reducing pain. 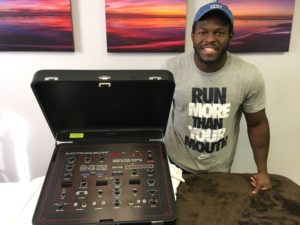 After Oliver ruptured his Achilles tendon in the last of the preseason games against Minnesota on August 28, many thought that it would be a career ending injury.  “The doctors said it would be a six-month to a year recovery period. I went from injury to game ready in about four and half months, which is unheard of in an Achilles tear,” said Oliver. “This machine will get you on the field and keep you on the field,” he added.

Branden purchased his own Equiscope to insure a speedy recovery and to maximize his peak performance for the 2017 NFL season.

In addition, fellow teammate Dwight Lowery, then safety for the San Diego Chargers, was being treated daily on a preventative and recuperative protocol with the Electro-Equiscope®, as well as fellow Charger Danny Woodhead for his ACL tear.  Woodhead recently signed with the Baltimore Ravens.

About Branden Oliver
As a former undrafted free agent out of the University of Buffalo, Oliver joined the Chargers in 2014 and went on to lead them in rushing with 582 yards and three touchdowns. He also had 36 receptions for 271 yards and a receiving touchdown.  The 25-year-old returns after missing the entire 2016 season with a ruptured Achilles tendon suffered during the preseason. The Chargers announced in a press release on March 23, 2017 they signed Branden Oliver to a one-year contract.

We Also Offer Training
To Become An Equiscope Technician

Clients by appointment only